Anyone out there ever had a headache or migraine literally make you wish you could just bang your head against a big wall and knock yourself out? It would be easier sometimes if you could just muster up the courage to do that, but we know that would only cause more issues than we already have.  I used to be one of those people that only got a rare headache that was usually linked to a virus or sinus problem that was not too terrible to deal with. I struggled with the thought of having some massive migraine that caused me to black out or want to lock myself in a dark room and pray for the end of time.  I heard all the stories and had family and friends that suffered with these types of headaches most of their lives.

The day arrived that changed my thinking about how bad it could be. I was in my thirties, and had the normal stresses of raising kids, full-time job, involved parent at school, worship team leader for my church, scouts, and other extra curricular activities. I was sitting at my desk in my little cubicle working on the latest crisis of the day. I was a project manager, and there was always a new crisis to deal with that came up.  The phone was ringing, my laptop was pinging at me with several instant messages popping up wanting attention, and my personal phone buzzed that it required attention immediately. Seeing that it was the school, I determined that took priority. I could feel this build of pressure and tension in my neck and going up the back side of my head. It was my oldest son and he had gotten injured at school during their free time. This was not a new thing for our family, as it seems clumsiness, adventure, and no fear of injury went from both of us as parents to our children.  I could feel the pressure getting stronger in my neck up my head, and a pain had started to come around the side of my head at this point.  I told the school I would be there as soon as I could. I responded to all instant messages as best I could. I returned the voicemail left by my boss on my work phone and let him know that I had to leave and why. His list of things to get done and where are with the current crisis well discussed for me to deal with as soon as I was able.  At this point, the pain and pressure was building to the point that I almost fell down when I stood up to pack my things. I laughed at myself thinking oh no, all is good; keep going and get out of here before anyone else stops you.  As I was packing up my things, the pressure and pain had gotten around my whole head and started making my eyes feel like they were bulging out of my eye sockets. My vision became blurry, and I was having a little trouble walking.  I got myself to the elevator and pushed the button down. By the time I hit the first floor, I could no longer see visibly. The blackness had taken over the majority of my eye sight, and the pain and pressure took me down to the floor.  I could not even make much sense in my speech, and my hearing seemed also impaired.  I was very lucky that a co-worker was coming in to go upstairs from a break.  He found me and asked if he could help. I had no idea what was going on, but I thought that I may need a hospital as bad as things were.  He helped get someone to pick up my son from school, and graciously took me to the ER.

Apparently, the ER had seen this sort of thing before, and they were not concerned about me and the fact that I believed I was dying!  By the time I got back into a room, and they started various things in my IV, the DR informed me that I had what is known as a migraine. I remember laughing and saying that is all this is! How is that possible? They do not hurt this bad, and I had never had one. The Dr had to be wrong! Well, they treated me with what I learned is called the “migraine cocktail.”  It worked like magic, but of course the way my body is, I started getting many side effects right away from the pain killer that was included in the cocktail.  The itchiness, the hotness, the sick feeling of nausea, and the shakes. The redness on my skin turned into splotches and a slight rash. I was quite familiar with this result, as most medications I have to take give me a similar reaction.  They gave me something else in my IV for those symptoms, and I eventually got to go home. I slept until the next day.  I ended up getting these dipilidating migraines quite often after the initial one. It started to become a daily fight.  I eventually got on daily medication from my Dr to help, and an emergency medication when a big one came on.  I got more side effects continuously and ended up having some permanent damage to parts of my body that required surgery.  I could not go on like this! I was banging my head against each wall I hit! I decided to get off all medications and search for natural healing.

I had been given a few essential oils for Christmas or my birthday around this time. They called it the basic set which is peppermint, lemon, and lavender. I was told that one of them may help me with my headaches.  I did find that peppermint did help break through the barrier at times, and it definitely helped with the nausea associated with my migraines every time. It just wasn’t enough to knock out the pain consistently or even at all sometimes.  As I began to study about essential oils, I learned about a few other oils that could he helpful with headaches. I tried a few blends made by other companies, and the result was very similar. Sometimes it worked and sometimes it didn’t. I also learned that body types and brains are all different and may react differently to an essential oil aroma or scent. This could be the quality of the oil, the particular smell, or reaction of my head to the scent. Our limbic system reacts differently as well as the chemicals in our brain to different scents. The more I studied, the more variations I started blending with essential oils.  I was of course my best guinea pig with migraines becoming a close friend of mine.  It took months of trial and error, but I had finally found the best combination for me! I started sharing it with others, and many of them reported great success and wanted to continue using it. There were family and friends, however, that it didn’t work for.  I worked closely with them on trying different combinations again. In this study, I learned that there are three types of people.  There are what I refer to as “mint” people, “clove” people, and “citrus” people. It seems generally speaking, the mint people were in the majority, with clove being second, and citrus the smallest population. There are a few people out there that say they despise all scents, but their bodies still react positively to one of the three. It was simply which one appealed to their senses the most. With the limited resources I had, I usually offered the mint version as my headache blend of choice, but when advised it did not work, I would offer one of the alternative blends instead.  It is amazing to me how beneficial the right blend can be to help our bodies! I hope that if you are a migraine sufferer, that you give my Headeaze blend a try. If you know you do not like the smell of anything mint, then I bet you are most likely a clove person! Have a happy headache free day!

Back
ABOUT NATURALLY RANDOM 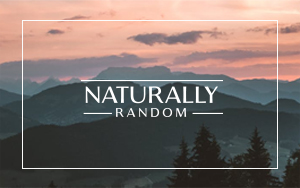 Naturally Random is a way of living life naturally. We specialize in creating custom essential oil blends. Our company was created for individuals that either know what essential oils they like and want to use or for those that are looking for... Read More.
Popular Post

Natural Remedies got you on overload?